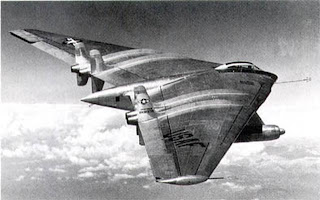 The YRB-49A took off on its first test flight on May 4, 1950. Its first flight was from Hawthorne to Edwards AFB. Tests were conducted at Edwards AFB for a period of time. On August 10, 1950, during its tenth test flight, the cockpit canopy blew off, tearing away the pilot's oxygen mask and injuring him slightly. Fortunately, the flight engineer was able to supply enough emergency oxygen to the pilot so that he was able to land the aircraft safely.
In early 1952, the YRB-49A was flown to Northrop's Ontario International Airport facility for the installation of a device that would improve the stability. However, at this time the Air Force had cut off further funding for the YRB-49A project, and the aircraft remained sitting out in the open in dead storage for a period of time. It was finally scrapped by the Air Force in November of 1953. 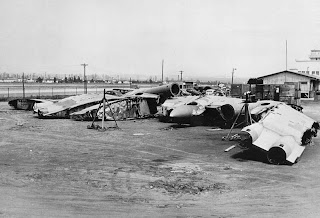 This may be the remains of the YRB-49A.