So, all of a sudden I'm working on a bunch of old bikes...all side valves, (except my BF8 build)
which rules because, to be honest, I LOVE these bikes. I love them more than new bikes, more than crazy choppers. I LOVE old stockers and old racers.
One big problem with them is the fact that they all leak from the plumbers fittings.  All of them.
BUT, my good friend Adam over at Milkhaus Speed Research makes some KICKASS intake testers...
2 bolt, 3 bolt and 4 bolt.  Here... 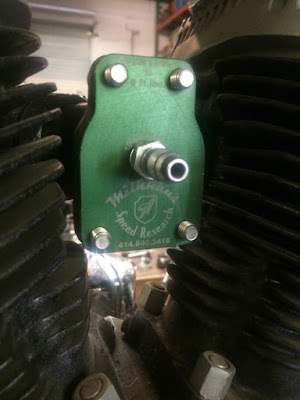 We have the 4 bolter attached to the '56 KH Im working on,
He sets 'em up to check for vacuum first.
That's what the engine does.  When running the intake passage is pulling a vacuum. Lets check that. It should hold up to 15lbs of mercury, if you are lucky. This one nothing leaks like a sieve. 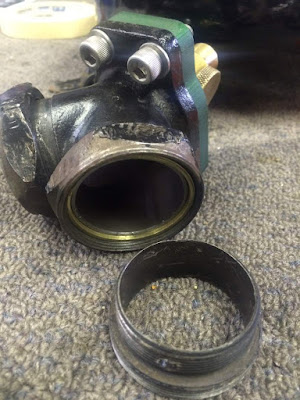 Turns out the threaded insert was loose, like super loose.  Gotta drill out the pin and seal with JB weld then re-drill and machine a new pin from scratch. 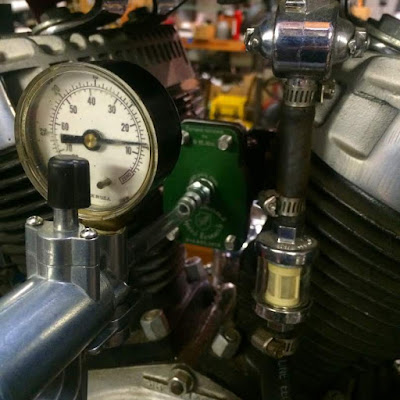 The next probem is the brass plumber seals, I should have annealed them to soften them up but we red some PEEK seals from Enfield Racing. PEEK is a crazy high temp plastic that works killer.  Sealed right up.   As you can see in this pic, it was holding about 12-13 lbs of mercury when I took the pic.  It should be a great improvement.

That brings me to this...
I am also building a few 45 race motors.  Not WR's, but using a bunch of tricks to get reliable power out of a 45.  No, they wont be FAST, but way faster than stock. I'll get to that soon. 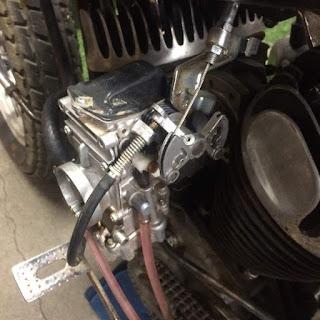 Above is the Mikuni on Rolands 45.  Works GREAT on there. BUT when I raced it at Sturgis, I kicked the carb off TWICE while on the track.   LAME.
So why couldn't I weld a damn flange onto the carb body? 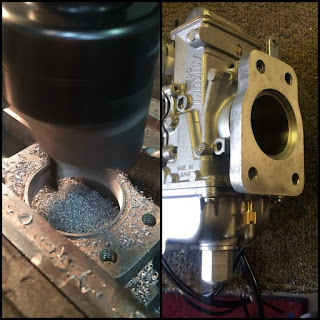 As you can see above, I bored an old adapter out so its a tight slip fit on the mikuni. 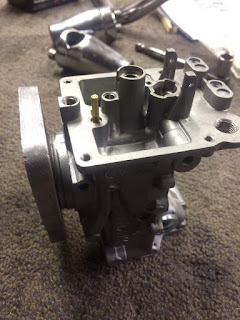 Then took the carb apart and we will weld the damn flange into the carb.

Yes, I know that's not the same carb on that bike.  This is the one for this bike. 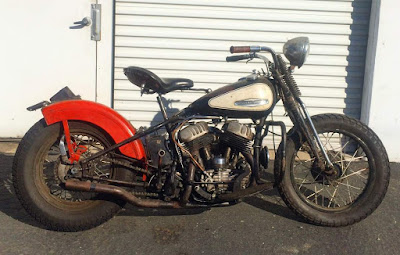 I'll be doing the same thing to Roland's when I go down there and steal the carb and manifold off the bike .

Pros...
1. You cant kick it off.
2. It's going to seal much better than the hose clamped hose.
3. It's going to tuck it in way better between the cylinders so its not going to stick out as far.

You might say that that 36mm carb is too big for a 45, yet I beg to differ.
With all I'm doing to the motors, I hope its almost too small.
Ok. Ok.  That's a bit much to hope.

I used the PEEK Seals and a 34mm Mikuni with the hose clamp on my old 45 wla. It was also ported and polished and had lightened flywheels, but had basically stock displacement. That, plus the right sprocket and keeping the overall weight down let me cruise around 85mph all day long at about 50mpg. I always wanted to try a 36mm mikuni, but it ran so great i didn't want to mess it up! I did pop the carb off a few times starting it, but only when the timing was off or I had a build up of fuel in the cylinders. I had thousands of mile on it when I sold it and it ran just as good then as when I built it. I only ever had to change the rings on it once. I never should have sold it!lol