Has anybody actually seen this? 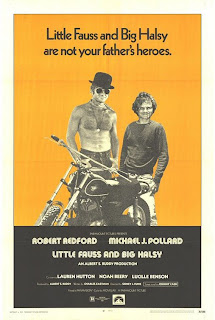 Posted by Chopperdave at 1:49 PM

you can watch it here

Oh Yeah, Man It is awesome. I can't believe you haven't seen it. It used to play on the Sunday Morning Movie all the time. Classic Bike Flick.

I remember seeing this movie as a kid. But the memory is dim...
I don't recall it being awesome though.

yeah! One of my favorites as a little bugger..

Yeah. It's pretty good. Robert Redford plays kind of a jackass - so the rumor goes that he bought all the rights to it so it couldn't be distributed or reprinted. I could be wrong about that but I've only ever seen bootleg copies.

Fuck, Dave, that movie was made the year you were born!

I saw it like 39 years ago, and from what I remember, it was pretty BORING.

Hey, guess what? In this movie, Michael J. Pollard plays a dummy....what are the chances of that, huh?

i remembered the chick being HOT in this movie....

Did any one forget that a young Lauren Hutton wanders around with no #$%^& clothes on? Other than that some good vintage machinery. Lots of early DT1 Yami stuff

As buddy movies go, it is fine. As for believable characters, it's fine too. As motorcycle movies go, it's way above average. loved it when it came out, saw it again recently, and still liked it.

I worked as a extra on this movie, three days in the desert while a helicopter filmed us. When I saw the film in a theater I still couldn't pick myself out?!?!

Johnny Cash sang the title song for this film!